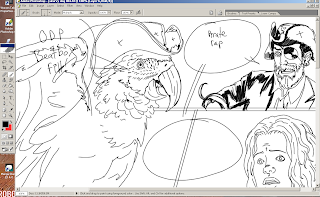 Bryan excels himself by fixing a problem that stumps even Wacom scienticians! But still can't fix their damned on-again-off-again drivers that don't seem able to register in Vista for any protracted period of time - computer on, computer off seems the only way to do that job, but hey, it's not like I was doing anything else on my Easter weekend anyway so I could totally afford to waste two days making something work like it's fucking supposed to.

Watching:
Vampire Diaries - waaaaaaaaaaaaank.
Kamen Rider W - aural and visual gibberish from the Japs that I lap up indiscriminately like a dog licks puke from a bus shelter floor on a sunday morning. It's no Kabuto, but Double/W has its own charm here and there, even if it does serve as a helpful insight to the Nipponese subconscious with its youth-obsessed cast, scary women, and very, very close bonding between male leads that can only lead to one of two things: they get angry with each other or they make out, and this being a kids show they pretty much much just end up shouting untranslatable concepts at each other before bumping fists, putting on a slightly camp hat and accompanying wrist gesture and then beating someone up under a bridge like trannies fighting over a bag of chips.
Stargate: Universe - speaking as someone who sat through every episode of Babylon 5, I can safely say I've never seen a tv show quite as far up its own arse as this one (though to be fair, I did give up on Caprica at the end of the first episode for being creepy, pretentious shit). The basic gist is that SGU is a grittily realistic take on the concept of a multicultural crew transported to the other side of the universe by a magic door created by jellyfish aliens when they used to look human and which was instrumental in defining the political face of the galaxy after a lengthy war between snakes in people's brains posing as gods who were fighting Lego spiders and the actual gods of Norse myth (who were secretly the Roswell aliens) on two fronts before they were beaten by McGuyver and a guy who was trying to act like James Spader and failing to even be that bad an actor. Thinking about it, there's no real reason a tv show can't be straight-faced and deliberately lacking in self-awareness to disguise that all its plots are lifted from other sources - oh wait, yes there is: it can't if it's a spin-off of a spin-off of a movie and all of the parent properties were dripping in self-awareness to the point it was sometimes painful because at that stage all you're doing is stripping the franchise of its affability in the hope of disguising that you're out of ideas, and SGU is charmless, and most definately out of ideas given the deus ex "Begbie comes back" device used in this episode. I'm beginning to think I only watch this show to annoy myself.
Posted by Brigonos at 4/05/2010 03:53:00 pm