Seeing as I'm still drawing robots that I don't want to spoiler by pasting pics on the blog, instead here's a quick snapshot of Nancy Drew getting along famously with the animal kingdom as usual. 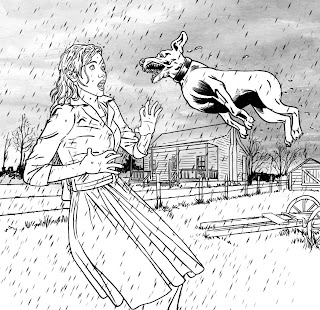 The story behind this sketch is a scene from the first Nancy Drew story, which is inexplicably described as a "mystery" novel despite being about the search for a copy of a will and having the title 'The Secret of the Old Clock'. SPOILER ALERT - it's in the old clock.
It was a choice between the exciting boat scene where she runs out of gas and floats there in the lake for a few hours, the blood-pumping car scene where she drives around and gets lost, or the frantic shopping scene where she haggles over a dress, but I choose this scene in the end because it lends itself to a vaguely amusing image of Nancy about to be horrifically scarred in an animal attack, as around forty pages in a good mauling would have helped up the pace of a rather sedentary novel about a nosy cow who wanders about until mysteries solve themselves. I guess this was what passed for empowering girlyism in 1930, though I'm not entirely sure how it caught on as a series of books, nor how it eventually led to women in the army and stuff.
Posted by Brigonos at 4/21/2010 10:25:00 am