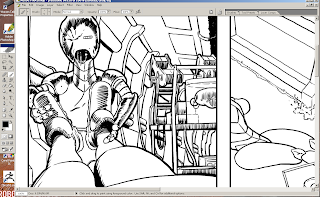 Watching HBO's Treme, I'm reminded of being so into any given scene - skateboarding, metal, mid-90s dance - that you just slip into the mindset with ease once you're surrounded by the people, a feeling captured in the opening scenes where the first Jazz parade post-katrina makes it's way through the Treme area of New Orleans accruing musicians and locals as it goes, but it continues throughout, be it in Steve Zahn's hand to mouth musician or the performance street-theatre of Mardis Gras Indians as some sort of badge of office, there's just this incredible sense of immersion in a time and place that if you step outside it for a moment and take note of the details of life there it may as well be another planet, and it's that immersion in a culture that crawls out of what's left of the Big Easy that makes Treme work.
You can believe John Goodman's offence at the suggestion that New Orleans isn't one of America's great cities much as you could believe it - warts and all - of the living, breathing entity that was Baltimore in HBO's The Wire, also made with the same staff and methods (local actors, knowledgeable locals as script consultants) as Treme, though the latter substitutes local musicians for the former's police department as the centerpiece of a sprawling ensemble, and while I enjoyed The Wire, I didn't feel quite as invested from the first episode as I do with Treme. It's just fantastic television.