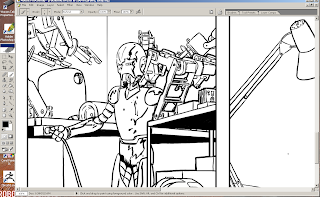 Watching: Justified, CSI: NY, Accidentally On Purpose, Outnumbered, Sons of Tucson, Clone Wars
Reading: Thor and the Warriors Four - in which Thor doesn't actually appear. Which is fine, actually, as he's probably going to be overexposed this year with the film and all, and this isn't actually a Thor book as much as it is the latest Power Pack miniseries, which is aimed at kids and thus naturally opens with the first third of the book dedicated to the main characters' grandmother slowly dying while people around her cry.
The story follows the super-rugrats as they seek out Thor and the city of Asgard in order to retrieve a golden apple that cures all sickness with which to return their dying grandmother to health, which if you think about it isn't so much childish naiveté as it is fair enough reasoning for kids who've fought alien tyrants and traveled in time. But this being comic books in the 21st century where Batgirl is stuck in a wheelchair because she doesn't know anyone who can fix a spine and we all nod and say "certainly, that makes perfect sense" rather than calling bullshit on a lack of imagination, there are two ways this story is going to pan out: 1) granny Power dies and an inevitable lesson about the transient nature of life is learned, or 2) granny Power gets a few more years and the bad things in life that we have to endure are kept at bay for a time and we get the happy ending that's increasingly rare in even our children's entertainment. Option 2 doesn't sound likely, does it?
A fun little book, all the same.
Posted by Brigonos at 4/09/2010 12:49:00 pm