I don't read the script. The script reads me. 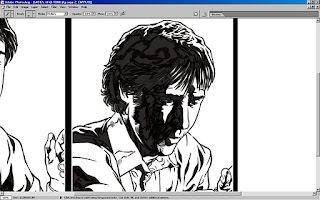 Watching: The Good Wife - I really have no idea why I enjoy this menopausal drama quite as much as I do, but it's one of the few shows I sit down to watch and actually pay attention to.
Harry's Law - retooled this season (it was a rush-job midseason show cobbled together by David Kelly after networks passed on his other pilot, an adaptation of DC's Wonder Woman) into something a bit more generic, HL is regularly savaged by snooty critics who pick up on the heinous crime of a main character who's politically conservative, but I like it. Kathy Bates is always watchable even when the story is a bit trite, though there are some bright spots among the backing cast - it's hard to go wrong when you've got a member of Spinal Tap onscreen.
My Sherlock theory is that he faked his death with a rubber mask or something put on Moriarty's corpse - something like that so continuity baggage can be dispensed with early in the next episode and the big mystery of the week can begin.
As a lover of the ludicrous I'd prefer something more convoluted, like the female journo being the real brains behind Moriarty and the Sherlock at the end being the person who kidnapped the children earlier in the episode, making the final showdown a ham-off between two evil doubles, but it'll likely be something simple. This episode was a bit of a cheat for me, not because of cliffhangery gubbins but because there wasn't much of a mystery in this show about a famous detective and it's just like Millennium, where the lead shows up and uses his magic seeing powers to tell everyone stuff that the viewer doesn't really have time to figure out themselves. It's all right, I suppose, but steps on the toes of the recent big-screen adaptation of the same source material, which was a little more entertaining, though equally non-mystery-ish.
Bones - I... am not sure why I still watch this show.
I watched some right at the very beginning (or rather I had Sky installed and couldn't be bothered cancelling it and just let the Sky1 programming wash over me when I was reading or too drunk to walk) and then stopped before the end of the first season, picking it up again about a year or so back as a way to fill dead air while I worked at a small design firm. I still watch it. I don't know why.
Bafling.
Posted by Brigonos at 1/19/2012 01:10:00 am