I only have two switches in my life: one turns off my emotions, the other makes a car bounce 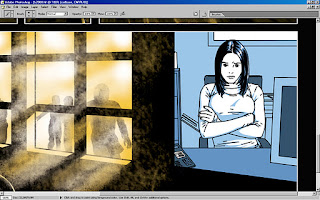 Colouring old pages and Jebus but I sucked so bad when I started this book.

No rants about Japanese telly you've never heard of and will never watch today, but I suppose I could try ranting about CSI Miami except, you know, it's like ranting at the wind to complain about American tv shows that are conservative, ill-informed and detrimental to the health of our culture. The latest episode (s10e12) sees a Steve Jobs analogue murdered by a magic bullet while trust fund kids complain about "the man" while talking on iPhones about how they're going to smash capitalism by vandalising Apple Stores - it's basically an episode written by the Frank Miller of three months ago. There's this bit where a character comments "I didn't even know this movement was still going on" and it's clearly supposed to be about how such things are flash-in-the-pan kiddie protests (there are no adults or working class people onscreen at any point during the protest scenes), but what it actually sounds like is the writers admitting that they don't have a clue about their subject matter and they're gonna stick the boot in anyway, which I would like to say is at least honest, except in practice it drips of a reactionary insincerity almost as funny as the episode where a character disapprovingly remarks of Grand Theft Auto that "you get extra points for raping the cashier" during a simulated robbery despite the fact that I don't think I've played a videogame in over ten years that had a scoring system. Angry Birds, I guess, but that's an iPhone app, and doesn't feature much in the way of robbery simulation.

Also, a couple of weeks ago I started saving for a new computer using the method of putting a couple of pounds aside every time my pc fucks me off in some way - and by "my pc" I of course mean "Vista" - and now have two hundred and five pounds in a jar, this being less a tribute to how good I am at putting money aside and more about how I am one hair away from putting my fucking boot into this monitor. It'll still take a while to replace the machine as between Vista and my Xbox failing in massive ways (1) I have resolved to never pay Microsoft another penny, which means getting a Mac, which are kind of expensive - it's seriously like getting a car. I suppose I could do that Linux thing people keep mentioning, but from here it seems like effort, you know?

(1) The Xbox is a fantastic but long story, the short version of which is "it took money from my account without my consent, won't play video or view pictures, and now none of the God damn games on it will work and all of this is how the machine is deliberately designed to function if you have more than one in your house." Way to reward your loyal consumers, MS.
Posted by Brigonos at 1/11/2012 12:30:00 am