I don't trust his aim, I've seen your toilet. And your kids. 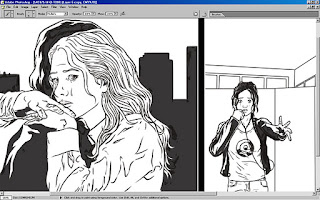 Watching: Alcatraz - one of those "name first, premise later" concepts that clunks everything into place really, really badly to the point you wonder if the writers put little notes on the script to themselves for later like "and then he says something like"you'll need a partner how about him" and they look at the comedy fat guy" and then then for some reason rather than think about how they might play this scene out in some way and go through the actual process of, you know, writing, the script notes get shot as they are rather than an actual script being drafted by the three - three! - writers credited with this season opener. That's what Alcatraz feels like - a bunch of script notes cobbled together from notions people took in the production meeting like "wouldn't it be great if our show could be a bit like Fringe or Lost or the 4400 or the Event or--" and then I went out to make a sandwich rather than finish this sentence where I list all the tv shows of which Alcatraz is derivative in much the same way that the writers of Alcatraz walked out and did something else rather than produce a decent season opener. It was a ham sandwich, FYI, and I find that some chedder and coalslaw help give the flavor a bit of body.
Alcatraz is a show about how everyone disappeared from Alcatraz one night in 1963 AND NOW THEY ARE COMING BACK and because we live in a world that does not have Google on your phone, this premise is watertight from the beginning, and certainly doesn't suffer from the difficulty of every other show in the sci-fi/fantasy genre in that there are no new ideas, merely different ways of telling existing stories which is why Battlestar Galactica came across as fresh despite being a remake. Presentation is everything, and yet Alcatraz is formulaic on the production score, looking like any and every other fantasy/sci-fi cop show out there. There's this vacuum in place of its identity - the use of Alcatraz itself is superfluous to the concept - and no reason why I should care to watch the next episode.
Rob - which stars Rob Schneider, and alongside American Horror Story it's one of those shows tremendously unsubtle in its construction but at least dedicated to some idea of what it's supposed to be, in this case a regular sitcom with a few of the central comedian's ad-libs thrown in to give it an identity tied to that comedian's persona a bit like How To be A Gentleman or Last Man Standing. This approach creates a clash between the demands of an actual plot with resolutions and stuff and the sensibilities of a comedian used to more misanthropic humour derived from the notion that life is inherently unfair, but the upshot is that while the happy resolutions can be a little trite in contrast to the central performance, you're never actually sure if the happy ending or the gruff central air of misanthropy is what's out of place, and the happy ending could be the way things are supposed to go and the griping of a hardened cynic is what's really out of place. I shan't lie, though, I did laugh at Rob, but mostly in a horrified way, like when he tells a Mexican family gathering "now I know what went down during all those siestas" when he notices they're a large family, and then defuses the situation with "I'm joking, you're a large family because you're catholic and you don't use protection". And then there's the hilarious sitcom staple of characters walking in on someone and seeing things out of context like when someone has their pants down when the vicar walks into the room kind of thing, the joke here being that Cheech Marin thinks his mother is being raped - fun for all the family!
Cards on table, though: this is a terrible show, a total train wreck - and I may just love it.
Posted by Brigonos at 1/18/2012 12:04:00 am