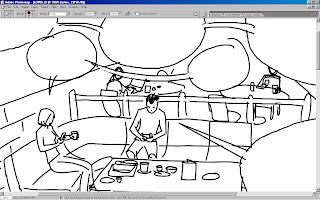 Watching: Roots: The Next Generation 1-3 - not quite as essential as the first few episodes of the original series before the happy ending kicked in (where it turned into a Looney Tunes-style chase where the heroes got one over on dumb ol' whitey), but still soberingly blunt in places as occasionally such material needs to be to remind us that we've still got a way to go no matter how many teen dramas skirt with the idea of interracial romance. I'm not really a big fan of those fictions that amount to little more than a holiday in the misery of others so I feel no real need to watch the Hostels and the Saws and the Eastenders, but for some reason I made time for this and I'm not entirely sure what I make of it, possibly because it's a grim reminder best summed up not by the scene transition that moves from a politician dropping names such as Plato and Cicero whom he has studied to help create the perfect oration for his would-be constituency which cuts directly to a man bellowing the word "niggers" at the camera, but by the sight of a weary black man with faith in fairness attempting to vote only to be stymied by clever tricks perpetuated by angry morons who hiss that "things are changing" and it reminds me that rather than the ever forward momentum we assume social progress to be, we can be dragged backwards at any time by anyone small and angry enough to not notice or care about the world they now live in.
Nikita 1.01/1.02 - a little confused by this initially, as it seemed to be a remake of the film/tv series up until the flashbacks were revealed to be happening in the present day and weren't the experiences of the young Nikita but a junkie she's groomed to be her replacement/mole in the agency that created her as she plays a long game in simultaneously deconstructing it from without and within. It's quite glossy with the older Nikita in scenes where she's supposed to be cocky instead coming off as obnoxious, but the worrying subtext of women existing primarily as sex objects remains from the 1990s series, with the younger female protagonist having to be rescued from two separate rape attempts in the space of ten minutes arguably changing the subtext to plain text rather quickly. It is all a bit unconvincing in a bad way as opposed to unconvincing in a good way like The Defenders, which is not a great show but wears its thoughts on its sleeve and thus can't really disappoint you because you are watching a guy running around with his dick all but hanging from his trousers trying to have sex with a Las Vegas stripper and you know more or less everything you need to in order to judge if you'll continue watching and whatever you decide you will be correct because curve balls are not part of the show's gameplan. Nikita, on the other hand, has a heroic lead who we're supposed to cheer for because she sets someone up to be murdered and another person to be gang raped just to further her own agenda. Possibly it's going somewhere with it all and there's a moralistic message to be found at the end, but I'd at least hope there's some sort of examination of the grooming/abusive relationship between Nikita and her young protege in the pipeline.
Superman 3 - which is nowhere near as awesome as this scene might make you think it is.
Posted by Brigonos at 11/28/2010 09:56:00 pm