You're the youngest woman detective in the Miami Police Department and I really admire you, like, a lot 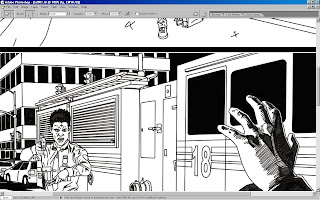 Small Press Big Mouth give me and comedy Geordie (as if there's any other kind) Lee Robson's upcoming Com.X graphic novel a mention over on their podcast, along with other ex-Insomnia bods who found new homes for their work after the collapse of the company. It's a pretty decent podcast because it centers more on the small press and indie books from the UK scene and is quite good for picking up on the kind of books you might not even know exist, though I do wonder why Lee and Stacy put on silly accents for it, though obviously I can't go throwing stones about silly accents.
Strange but true: you know Brad Pitt's accent in The Devil's Own? That's a Cookstown accent (he even name-drops the town, though erroneously places it on the shores of Lough Neagh despite that being a half hour drive), and it's often ridiculed by English comedians for being ridiculous and unrealistic - well pardon us for not meeting your high standards of faux-gaelic brogue you middle class university-educated cunts. We can't all sound like your The Edge, or standard-bearer for pretend Irish the world over Shane McGowan.
Posted by Brigonos at 11/15/2010 09:36:00 pm