...and I'd like to thank Seth McFarlane for not singing. Or telling any jokes. 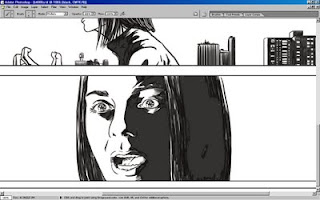 Much as I enjoyed Casino Royale, it's not the reinvention of the Bond franchise many have claimed as much as it is an extension of concepts and ideas already present in the series - particularly Timothy Dalton's short-lived run in the role - but then recycling is nothing new to the Bond movies anyway. I'd argue that 24 is a greater influence on this one than the more obvious Jason Bourne movies, but apart from that I have few actual complaints. They move the goalposts whenever a new actor takes the role and with Craig the intention seems to be to make Bond less verbose and more of a focused hooligan character in keeping with Craig's looks - not saying he's ugly or owt, but he's no oil painting - although there's the odd moment where Bond does come across as more of the old-school character, particularly in the exchanges with Eva Green's Vesper.
I also enjoyed Quantum of Solace a great deal more than I expected given it once again rakes over the coals of the Bond Seeks Revenge plot, but its biggest problems are more the confusing mess several of the action sequences are reduced to, though maybe I'm alone in thinking that when you're watching an action movie the action sequences should be what you look forward to rather than something you endure until the plot kicks back in again. Whatever the case, the car chase at the start, the end of the free-running chase where Bond scraps with another agent in a greenhouse (or whatever it was), and intermittent sections of the plane attack and boating chases are just visual noise rather than visual narratives and they really got my goat. Luckily the story is pretty good, with Olga Whatserface being one of the better Bond girls by dint of having something going on apart from looking grumpy and playing hard to get until the end of the second act.
Bloodstone I played out of a sense that videogame stories have come a long way and it'd be worth a look to see some more of Danial Craig's take, but the script was shockingly poor and I'm more or less certain that it was held over from whoever was making the Pierce Brosnan games, as stuff like M's open adulation of Bond is out of place in the Craig era, as is the groan-inducing addition of Joss Stone as a supercriminal mastermind, which is hard to swallow for anyone who's ever heard her give an interview, though my biggest gripe would be that the story revolves around a secret organisation trying to fund the development of weaponized Anthrax as I'm pretty sure that they have that already. Away from the awful script, the gameplay is pretty linear and unimaginative third-person stuff where you can at least gleefully replicate the feeling of being Craig's Saxon murder machine by sprinting around the levels and hammering the square button to instant-kill anyone in your path, but the driving sections... man, the driving sections, they are just horrendous like you wouldn't believe. The physics alone are appalling, but it's liike the makers never played another racing game in their lives - maybe I've been spoiled by the fantastic Split/Second's bizarre approach to videogame racers in that it dispences with the idea of realism in favor of being enjoyable to play, but Bloodstone's racing levels are the very definition of awful, and in one particular level you can't tell the difference between ice (which you can drive on) and water (which kills you instantly), reducing something which should be entertaining to a confusing and unrewarding barrage of noise and visual chaff that instills only feelings of frustration and confusion - it's basically like playing the action scenes from Quantum of Solace. A good indicator of what a mess it is would probably be the baffling name, as the story has nothing to do with conflict diamonds or precious stones of any sort, making me think the high visibility of diamonds in the opening credits and the title are a throwback to an earlier script or game draft - again, hinting that it's a holdover from a different Bond project whose space-age levels are ill-fitting with the current tone of the films.
It's a game I played through in less than four hours, but I only paid a fiver for it so I don't feel I've been cheated terribly, though someone paid near fifty quid for this once upon a time and that can't be right.
Posted by Brigonos at 9/06/2011 11:14:00 pm