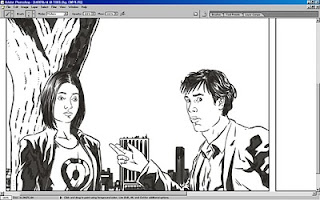 Watching: my way through the CSI franchise from day one and got as far as CSI Miami season two and CSI season four, and once I finish the former I have CSI New York to get stuck into as well. They're a reliable old workhorse of adolescent cynicism masquerading as mature storytelling for the most part, but it's around this point in the franchise that they started to become overt parodies of themselves without actually lapsing into self-awareness, and the legacy is felt to this day in tv cop shows such as
Against The Wall, which is largely dreadful, but did a remarkable pull back and reveal at the end of the latest episode when the guy who is clearly who you'd pick as the true criminal going by standard tv form is revealed to be just a decent guy, making an open mockery of the CSI legacy of tv shows whose big 'reveal' is that the victim is the real guilty party and no-one is innocent and the world is cruel and wah-wah-wah.
Cynical in a different way is Combat Hospital, which is admittedly still funnier than the final season of MASH, but also a thick-headed and clunky series that doesn't try harder because it knows its audience and we just aren't worth that effort. It's a near-criminal waste of the always watchable Elias Koteas, who can make even the worst of his dialogue sound good, but with this show I suppose he gets plenty of practice.
Another character actor largely ignored but always reliable is Miguel Ferrer, utterly wasted in The Protector, a vehicle for the bafflingly successful Ally Walker, here cast as an unfunny Mary-Sue smartass cop doing cop show stuff and generally making people want to punch her in the face, which crucially they do not do. It's not great.
Royal Pains I was enjoying while it had the Fonz in it, but now it doesn't, so I don't so much. The Fonz' last appearance had Ed Asner as his dad, so there was that, but otherwise the show remains oddly fixated on super-competent and super-dull Hank as he saves the day a lot with fast music playing over his MacGuyvered medical exploits and never once does he display a hint of character. I can see menopausal single women liking this show, as hank is not very exciting and I can see them wanting to have someone as un-threatening as he is as their partner/son/whatever it is menopausal single women want in their lives apart from chocolate and more open affection from their cats.
Drop Dead Diva I am still watching, as for some reason it's my preferred hour-long show for when I'm in the gym and not in the mood for something as short as cartoons. I keep thinking they'll pull some of the mystical stuff back out of the hat and the main character will have to defend someone in a supernatural court where Satan/God is the plaintiff, like maybe Satan will call foul on all the disproportionate good she's done as a lawyer since returning from the dead, but if it doesn't and it just spins its wheels with the love triangle stuff I'm probably okay with that, too. Guess I should just book me my vagina attachment surgery now.
Can't recall what I was doing when 911 happened as I didn't think it was that big a deal at the time, but Dennis Leary obviously disagrees as Rescue Me - the closest thing he's had to a tv show that hasn't been cancelled - has been cancelled with a finale timed to coincide with the 10th anniversary of 911, and by 'timed to coincide', I mean they stopped showing the last season halfway through and waited a year to cash in on the timing. Eh, it was reliable telly, I guess, if you can tolerate the deification of the main character by the rest of the cast, so noticeable in the last couple of seasons that it prompted my brother to coin the term "Leary Sue". Not great, but it had the occasional moment.
Posted by Brigonos at 9/14/2011 12:09:00 am