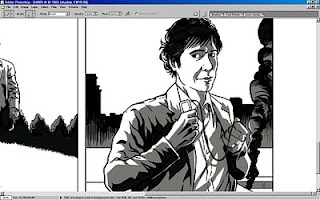 Watching: Strike Back, which was a pleasantly thick-headed series once, before they went and revamped it as a juvenile misogynist fantasy. Love the Irish accents, though!
Star Trek - because somehow I have never seen the entirety of Spock's Brain, widely regarded as one of the worst episodes of sci-fi television ever made and yet clearly nothing of the sort.
Don't get me wrong, it is not good, but then again it's not that episode of Voyager where Tom Paris drives his space car really fast and then turns into a manatee, either - which is literally what happens in the episode, prompting the actor who played Paris to go on record as saying "When I first read that script, I couldn't believe they were going to shoot it." and this was coming from a guy who starred in the Masters of the Universe movie and regrets nothing. Nor is it that episode of Deep Space Nine where they do the traditional (and slightly creepy) sci-fi story about a young female character being artificially aged into a buxon type, and instead of thinking up a technobabble reason for such a thing to happen the writers just have her fall into a magic tree. Nor is it that episode of Flash Gordon where... well, it's not an episode of Flash Gordon. Anyhoo, I enjoyed it, especially the remote controlled Spock and the kinky caveman "they bring pain... AND DELIGHT."
Posted by Brigonos at 9/15/2011 11:59:00 pm