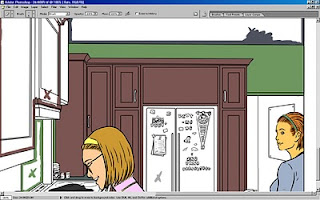 Oh colouring with a 'u', even though I don't know what the hell I'm doing you never fail to calm me down after a hard day of committed failure.
Watched the season finale for Drop Dead Diva and thoroughly enjoyed it. During this season I did have qualms about the moral tone of the episode where a student claims to have been raped and the denouement is not that her lawyer proves where her college is criminally liable for covering up evidence of this but when the student is awarded a large sum of money for her pain, but that aside it was the kind of stuff I like to watch in the gym, like Outsourced, which I liked and thus was probably doomed to cancellation for that reason alone. I guess that means Diva is probably cancelled, too.
Posted by Brigonos at 9/28/2011 01:07:00 am