dragging you down to my level and then winning through experience 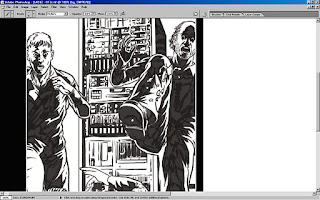 No long-winded sermons about sci-fi shows today - which I'm sure is a great disappointment to us all - but I should probably mention that I have a strip appearing in the Accent UK Predators anthology, which I keep forgetting about for some reason.
There's a review over HERE if you're so inclined to check out a podcast done in silly accents, though me and Lee get off quite lightly for doing fourth wall-wobbling stuff, which I gather is either loved or hated in comics. Got some other stuff that's appearing in the near-ish future I should get round to whoring, too, like that Zarjaz strip in which I drawed the ABC Warriors and somehow forgot to include guns in the artwork. One day I shall look back on that and laugh, but the way I picture that happening is me wandering around an irradiated wasteland trying to explain to mutant children what computers, comics, or oil were and gradually going more and more insane until I turn into the kind of gnarly-toothed hairball that gets shot by Mad Max while he's on his way to somewhere interesting.