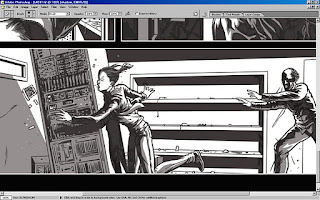 Odd moment today while watching the latest Power Rangers: thought to myself "this is quite awful compared to previous iterations" like this was actually any kind of criticism that could be applied to Power Rangers in any form ever. They are all terrible, I admit, but I do have a soft spot for RPM, where the human race has been all but wiped out by a sentient computer virus and the last few thousand humans are killed off in weekly attacks by bizarre monsters who slowly erode the humans' dwindling resources while the back story of each cast member unfolds across the series in non-linear flashbacks that intertwine with each other in subtle ways that aren't fully realised even by the series finale that - against all saturday morning tv show logic - doesn't have a time-travel loophole that undoes the genocide and the deaths of cast members and/or their families like it never happened, it just has the evil computer get smashed and the humans get to rebuild their race on an irradiated graveyard full of wandering psychopaths and malfunctioning leaderless killing machines and everyone acts like this is the greatest thing ever rather than a prelude to an era of unfettered rape and cannibalism.
Posted by Brigonos at 10/14/2011 12:00:00 am