I take the good with the bad together - I can't love people in slices. 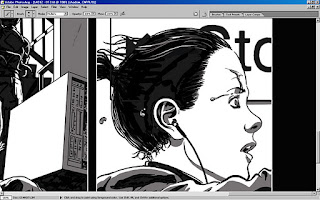 If you'll forgive the incestuous plugging of another blogger's posts, Colin Smith has written a Dear John letter to Mark Miller's writing over on the Too Busy Thinking About My Comics blog, mirroring sentiments of my own about Clint #11 that began with Kick Ass 2 and continued into the appalling Officer Downe, a strip about which I cannot decide if it's a genius-level homage and distillation of the willful stupidity and desperation that typified Clint honcho Mark Millar's earliest 2000ad work, or if it simply is just a waste of time even to apply reason to its critical appraisal.
I think the watershed moment for me in Clint #11 came a few pages before the rape scene that's gotten Colin's dander up (possibly because rape can be survived and sexualised depictions of even teenaged females are nothing new in comics and stitching that onto the cynical violence of the rest of Kick Ass 2 is just an inevitable progression), specifically when several children are gunned down, although I get the notion in me that Millar has been trying to figure out how to do a Dunblaine cash-in for a while now and I'm happy for him that he's finally found a way to infuriate grieving families in a manner that allows him to be paid for doing so.
It's only a shame that there hasn't been a timely school shooting somewhere to help him promote the magazine further.