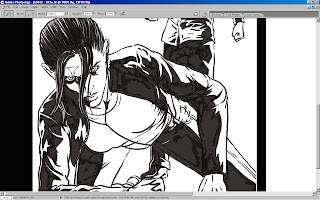 Watching: Transformers Prime, and when all is said and done, that was a fun series if you can get past it being Transformers, which some cannot, as Transformers is one of those franchises - alongside Star Wars and Star Trek - that brings out the sniffy elitism from some quarters of geekdom that admittedly holds more water in the wake of three shitty, shitty films, but I get by with it just fine on account of it being a sound high concept premise for a franchise. The most recent toon had its ups and downs but was a pretty decent show with a good stab at portraying Transformers as an alien form of life rather than just big stompy robots, with planet-sized transforming robot Unicron getting the best makeover this time out when reinvented as The Space Devil, who - after being "cast out" and drifting through space long enough for a planet to form around him and make his waking up a dashed inconvenience for anything unfortunate enough to have evolved on his now green and blue surface, is just the kind of apocalyptic demon you need to cap off your series about ginormous aliens twatting each other in the face with helicopters full of angry soldiers. Not sure about the pseudo-Gladiator/Spartacus riff that reared its head in relation to what the cast got up to billions of years ago, but all told, I enjoyed it even when sober - praise from Caesar indeed.
Revenge - being an update of the Count of Monte Cristo, but with a teenage girl in high society. Sigh.
I was not sure about yet another glossy tv show centered on the one percent of America's population that has wealth, but then: "revenge is a dish best served cold - but it can be AS WARM AS SOUP". Yes, that is an actual line from the show. And they mean it.
Posted by Brigonos at 10/18/2011 12:59:00 am