I can see the deadly hamburger has done its evil work 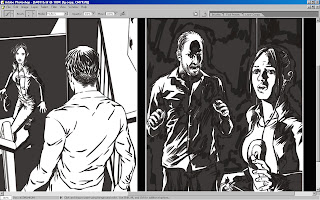 Watching:
Covert Affairs, a glossy take on Alias, which was already glossy. I cannot say if having a vagina helps to watch it, but I get the impression that this is where the makers are coming from with it. It's really dumb, though, and I've always got the impression that women can take really dumb shit at face value if it's happening in a Malibu fashion agency or or a really well-off suburb full of big-tittied blondes, yet faced with a story set in the world of international espionage they err towards wanting a bit more logic, therefore I have no idea who Covert Affairs is aimed at. It's managed two seasons so far, mind, so someone knows what they're doing. I like Peter gallagher usually, but in this he's wasted as I'm not sure what we're meant to make of his character. Or the Indian bloke's character. Or the deaf bloke's character.
Eh.
Adventure Time With Finn and Jake. I have no idea what to make of this - I like it, but it's baffling. Who is this aimed at? Are those references to 8-bit videogames or just stylistic choices by the music department? Do kids like this? I like this.
Twentysomething - Melbourne-based comedy about the bull-headed and obnoxious Jess and her sexless friendship with the dim but gentle Josh as they tackle a quarter life crisis brought about by their constant drinking and lack of ambition. You might think twentysomething is too young to be having these kinds of identity crises, but after being forced to add my nephew and niece on Facebook I did find them talking to their mates and posting stuff like "wasn't it great back when we were all in the same science class? Them were the days" which I find slightly more disturbing than the thought of them exchanging pictures with Miguel who is quote-unquote twelve years old and wants to meet up, so twentysomething is probably late for this kind of self-evaluation. It's the usual squirm-inducing type of comedy derived from embarrassment and misfortune that seems to have done well by Ricky Gervaise, so worth checking out if you like that kind of thing.
Modern Family - which is not very popular over here, but is doing fine over there. A bit more cloying and saccharine than the preceding seasons, but still quite funny.
The Playboy Club - a period-set drama about chicks dressed like bunnies because this for some reason arouses men in the nineteen fifties. I have no idea why.
It's trashy, certainly, and that will buy my attention to at least episode four, but not entirely convincing in its period trappings and not a patch on the likes of Boardwalk Empire or Mad Men.
Pan Am - another period-set trashy drama, this time about air stewardesses in the titular airline (now a train freight company) circa 1963, when stuff happened in Cuba and whatever. Or something, I'm not sure, my mind really wandered during this and there was this whole plotline about someone at a wedding or getting married in the near future and I was lost at some point. maybe it improves after an episode or two.
Posted by Brigonos at 10/10/2011 11:57:00 pm