Well this is gonna end in hillbilly rape... 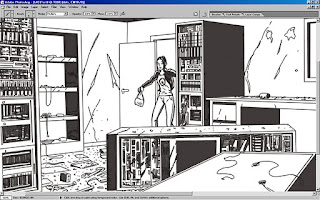 Been checking out the new 52 from DC comics - or rather I've been checking out the tremendous amount of online bitching about it - and I have to say I find a lot of the criticisms confusing as they seem to have assumed that the books would be different even though they're made by the same creators, the same editors, the same ideas men, published by the same company, distributed in the same manner, aimed at the same audience, and so of course Grant Morrison is still writing great Superman comics, and of course Starfire is still a sex object because why bother developing female characters as anything else and hey of course DC's first black superheroine is a stripper and there is no correlation between these two things at all and it's probably the fans' fault somehow yet again since the books are still stuck on squick like fanfiction sex scenes and dudes getting their faces cut off and it was the fans' fault the books were failing when this same old nonsense was trotted out before and certainly not in any way the end result of an office where female employees are dragged to strip clubs for 'power lunches' with the very very manly alpha male men. GRRRR. Wall Street was a super movie, wasn't it? That's how real men roll.

I think the collective internet is more pissed that it got suckered into believing that there was going to be a paradigm shift in how DC did business even though there hadn't actually been any kind of management reshuffle to suggest this would ever be the case, but the sad fact is that these books are no worse than what DC was putting out before, they are just as bad and no more than that and if you liked what they were doing before you probably like what they're doing now, too. Some of it, anyway - they're still employing Grant Morrison and Gail Simone, after all.

This was never "make or break" for DC, it was just another summer event where DC shifted a lot of #1 issues and stuck to its audience of compulsive buyers and conventioneering yes-men who don't want change or they'd have stopped buying superhero comics ten years ago - this was always going to be more of the same and I don't know why my beloved and eternally cynical internet thought otherwise even for a moment. Personally, I liked that Batman where Joker got his face sliced off and Batman saved a little girl from nasty people. It was gritty and people knew their place: behind Batman or on the end of his knuckles. Things asploded, too. Always a bonus.