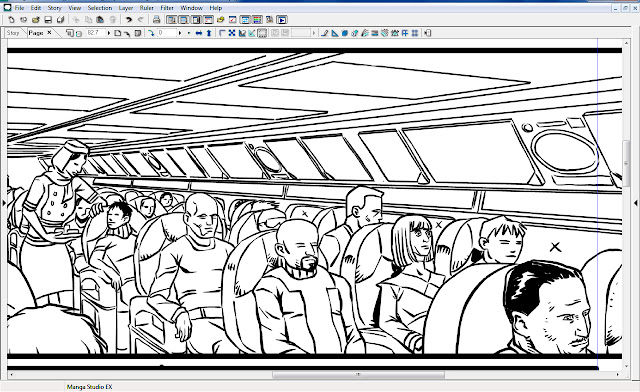 Continuing the Halloween horror marathon, been watching:
The Pack - initially promising b-movie monster flick about a pack of wolves menacing a family - who are also a pack, so it's got levels - that lost me when it descended into predictable jump-scare cliche and the only unexpected moments came when characters or the script did things that were monumentally stupid and illogical even in the context of a slasher flick.  Shot in Rivendell and Parth Galen, it certainly looks nice, but in this day and age this means little in and of itself and the script fails to do anything interesting in the long run.
Lake Placid vs Anaconda - a mash-up of two different monster movie franchises, both of which started out as trashy-but-fun cinema-releases with bankable stars but which of late have been SyFy-funded, becoming increasingly tedious and aggressively poorer viewing experiences the longer they endure.  There are a great many attractive young women in this, in various states of undress, but any enjoyment you might hope to glean from this element is somewhat undermined by their being bumped-off in gruesome but not very inventive ways, making this a continuation of the popular trend of horror fantasy that doesn't seem to like women very much despite plastering their forms everywhere.  There's a bit where two characters sit around talking about teenage girls and laughing at how they like to get tattoos of butterflies on their ankles and pierce their navels and then they laugh at how vacuous such people are, and all I could think of was those teenage girls who cut themselves when their favorite boy bands break up and Twitterati laugh at them for doing so, responding to the confused pain of other human beings with a misplaced sense of superiority.  This is a paradigm for Lake Placid vs Anaconda's problems, in that it likes to pretend that its making fun of the shallow, characterless, unimaginative filmic and televisual landfill that comprises SyFy's output, but it would be a step up if it could only be as bad as that.  This is poorly-made, cheap, and lacking in even a single moment of wit, the equivalent of a sneering yob arguing with you by repeating your words back at you but garbling them a bit when they do so before announcing that they are doing this "because you're retarded."
I'm not saying Lake Placid vs Anaconda is shit, I'm saying if shit could shit, Lake Placid vs Anaconda wouldn't even be as good as that.
Live and Let Die - WHEN YOU WERE YOUUUUNG AND YOUR HEARRRRRT WAS AN OPENNNN BUWUK... an always-enjoyable warhorse of a 007 outing this one, despite featuring the best Bond YES YOU HEARD ME caps lock sticking a lot today it's often derided for the decision for the franchise to appropriate blaxploitation much as it had other genres, the wisdom being that if you have blaxpolitation with a white lead, you basically have racism.  Particularly in its excesses and casual sexism, blaxploitation as a genre actually shares a great deal with the Bond movies - just watch something like Black Samurai or Black Belt Jones to see what I mean - and so it's actually a more natural fit than many would like to admit.  Eight year old me took it deadly seriously even if viewing it as an anachronistic cartoon was probably the only sensible approach for the eight year old me who watched it earlier today.  Great fun, and I suspect as of this viewing that it may have contributed to my enduring love of wacky chase setpieces, too.
Posted by Brigonos at 10/20/2015 12:35:00 am