...when your Elvis dies, so does the private lie that someday you will be young once again, and feel at capricious intervals the weightlessness of a joy that is unchecked by the injuries of experience and failure 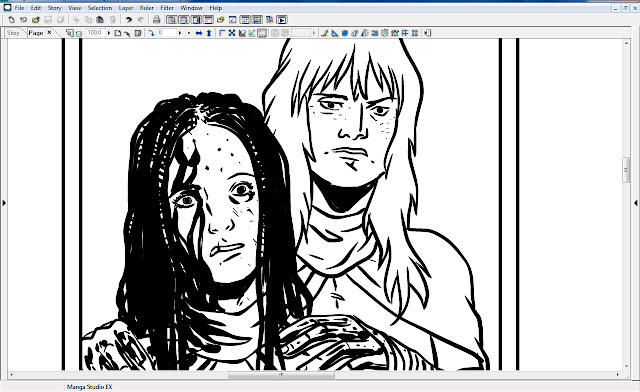 And with today's entry, I clock up my 1000th post on the blog!
I have wasted my life.

Watching: because it's Halloween at the end of the month...
Extreme Ghostbusters Back In The Saddle parts 1 and 2 - I don't think I've ever seen any of Extreme Ghostbusters until this point, but the episodes where they team up with the original characters from the 1980s cartoon-of-the-film seemed to be the ones to check out.  Seems a bit anemic compared to other 1990s cartoons like Batman, Superman, Gargoyles, Invasion America, or even the shallow but eventful Spider-Man and X-Men offerings, with the characters rather thin and the plots a bit messy.  I think it relies on familiarity with storytelling tropes alongside stereotypical characters so the audience can fill in the odd blank in the script from their own viewing experience, and the overall effect is quite charmless.  The visual design also lacks consistency, not helped by cheap animation.
The Snow Creature - a 1954 b-movie picture about some blokes finding an abominable snowman and trying to cash in by returning it to civilization - things go downhill from there.  You can find this on Youtube if you fancy, but it's not really worth it, lacking any nuance or charm and being a cheapo riff on the basic plot of King Kong.
Dark Moon Rising - "I am Dance.  We have literature together."  A film about werewolves with superpowers, including one who shouts out the name of every kung fu move he's about to bust on someone's ass, the most ridiculous thing about it nevertheless remains to be that that it stars Eric Roberts and I still thought it might be good.  When Roberts' character has a Vietnam War flashback in which he is attacked by werewolves, I decided that this may very well be one of the most amazing(ly terrible) films I have ever seen, elevating creative incompetence to levels I would not have thought possible when I awoke this morning.
Posted by Brigonos at 10/05/2015 11:56:00 pm

Labels: horror, my life is a patchwork of regrets, screen grabs, waffle