There are no chicks with dicks, only guys with tits 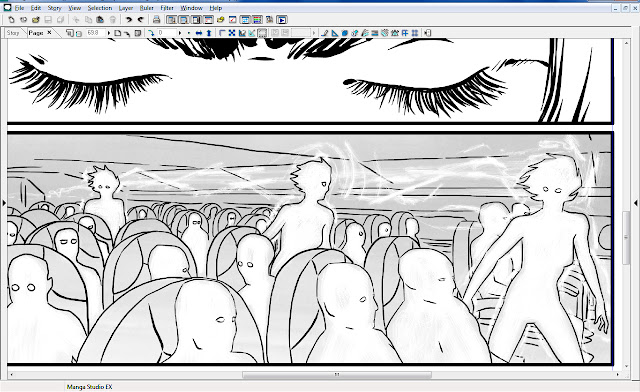 More Twilight Zone episodes today:
Elegy - 200 years after Earth's atomic holocaust, a trio of astronauts land on an asteroid and find a perfect recreation of an American small town populated with unmoving humans, seemingly frozen in time.  It transpires the whole thing is an elaborate cemetery/taxidermy exercise for the rich, the existence of such a place being lost to the chaos that followed the war centuries earlier.  The caretaker of the cemetery poisons the three and preserves their bodies at the controls of their spacecraft, just as they foolishly mentioned in passing to be their preference.  I admit I am a sucker for a good cemetery planet story, but this one kind of mixes a few different TZ staples and comes up with a muddle of a plot where nothing quite sticks.  It's kind of like Die Another Day in that regard, as there's nothing wrong with the different stories at play, they just don't mesh into a coherent whole.  It also seems heavily influenced by Ray Bradbury's Mars Is Heaven/The Third Expedition.  As with most par/sub-par TZs, though, it's hard for it to outstay its welcome.
Mirror Image - waiting for a bus at a lonely depot, a woman becomes increasingly convinced that she's being stalked by a doppelganger determined to kill and replace her, and is eventually carted off to the booby hatch while her lookalike takes the woman's luggage and catches her bus.  Then a bloke chases his own alternate in vain down a street because Something Or Other.  If it had ended with the dark other catching the bus out of town, I think it might have pulled this off, but as it is, I like that the script hand-waves any attempt at hard science in favor of existential panic, but there's quite a lot of that building-to-hysteria stuff that populates a lot of Twilight Zone episodes, and I don't really see that as drama so much as I see it as shouting.  To me, drama isn't someone raising their voice, it's conflicts of interests between characters and how that conflict plays out over time.  An okay episode, but not great.
The Monsters are Due on Maple Street - a power outage leaves a street in a small town isolated and the residents begin to speculate causes such as terrorism, atomic war, and flying saucers - before the night is over, paranoia causes things to escalate.  On a nearby hillside, beneath their spacecraft two figures watch the riot unfold and sneer at how easily humans can be manipulated into destroying themselves.
More building-to-hysteria stuff here, but this time it's the whole point of the story, and it's actually pretty good, with Rod Serling's closing narration morosely opining of prejudices that "the pity of it is that these things cannot be confined to... the Twilight Zone (DOODOO DOODOO, DOODOO DOODOO DANDANDANDAN)", although the reveal of aliens being behind it all was a bit goofy, as I think the idea of people destroying themselves is undermined a bit by their being pushed towards it by outside agents - but I suppose it might have been necessary to have that component to dilute the bleak premise of the plot, in case the broadcasters of the time didn't want to show it.  A dang good episode.
A World of Difference - A man planning a vacation with his wife suddenly finds himself on a movie stage where he is an actor playing the part of the man he thinks he is, and those around him are so convinced he's having a nervous breakdown that the film is cancelled.  Seeing the loveless and joyless life of the "actor", the man flees back to the set and rejoins his wife as they embark on their vacation, the movie people confused as to where their washed-up actor has gotten off to.  I don't know if I enjoyed this one or not, so horrible was the actor's "real world" wife that I found it impossible to objectively evaluate what I was watching, such was my overpowering compulsion to reach through the screen and throttle the life from the money-grubbing harridan.  The upshot was that when the guy escaped her forever by entering a world of fantasy, you feel really good for him.
Seriously, what.  A.  Bitch.
Posted by Brigonos at 10/30/2015 12:10:00 am