Hmm - suspicious hand placement here. Something to fix at the editing stage. 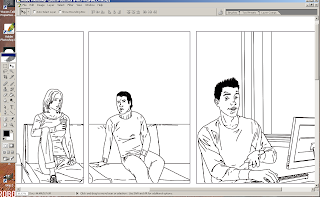 Reading: Secret of the Old Clock - I wonder where this mystery will that everyone is seeking could possibly be secreted? If I make a joke about the title of the book and it turns out that's not where it's hidden I'll just look foolish, so I'll just keep my suspicions to myself. Nancy Drew's enduring appeal escapes me going by this debut, because she doesn't seem particularly capable, just excitable and dogged. I had the impression - before her age was revised downward and they removed instances of hillbilly worldview from the narrative in later novels and reprints - that Nancy's original incarnation was along the lines of a Spade or a Marlowe only in a posh frock and slightly distracted by boys - which is absolutely a series of novels that needs to happen if it hasn't already - but here she sort of stumbles onto clues while buying dresses, running away from puppies, or hiding from the rain. I don't think I can characterize her as stupid, but being well-meaning and stubborn is pretty much all she's got going for her, as so far she just seems to be a bit of a nosy cow.
What I did take away from the book is odd references here and there like Nancy's mum dying "in an influenza epidemic" like epidemics are so common they don't even need specifying, and the sneaking feeling that Nancy's enemies seem - even when they're the wealthy Tophams - to be thinly-veiled working class stereotypes of the council estate/trailer trash variety, even though the absence of minorities (thus far) seems to suggest this is a later revision - guess them damn working classes are always the bad guys, depression or not.