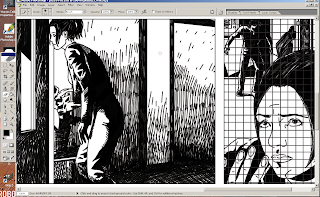 Watching: A big ol' plate of bacon, as Southland returns - which is a surprise to me, as I was pretty sure it was shitcanned - and The Bridge debuts.
The Bridge features him off Battlestar Galactica moving out of the sci-fi slum into legitimate telly acting with a tale of politico cops alienating a uniform officer one time too many, prompting him to go on a reluctant crusade to expose their backroom shenanigans while also cleaning up the union. It's blue-collar fantasy no different or more likely to come to pass than killer space robots being our ancestors, really, but it's entertaining enough fluff whose only sticking points are a main character who's a bit too vanilla in the opening episode (prompting me to think we'll see some glaring character flaws shoehorned in for their own sake in episodes to come), and a logical failure that pretty much breaks the air of pseudo-realism the show was aiming for when corrupt cops stand around a backlot taking huge sums of money out of plain brown bags to show it to their co-conspirators who then count it in plain sight while a man photographs them from afar - this, to me, does not seem like the actions of people who know how to run a vast conspiracy and not get caught. There's also another bizarre bit of logic where a guy tapes a conversation where another guy says "support me or I'll fire you later" when their previous conversation was the guy saying "I give you my permission to kill my fellow police officer", which I suspect would be ofslightly more use in a smear campaign. But, y'know, I just watched an entire season of Starsky and Hutch so clearly my bar for cop television is quite low, so I'll stick with The Bridge for the time being, even if it isn't The Wire.
Posted by Brigonos at 3/11/2010 02:35:00 pm