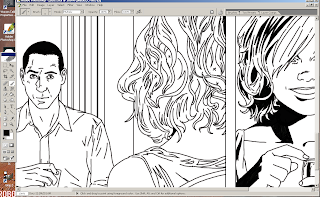 Watching: Silver Bullet - right, if it hasn't surfaced in past comments on the blog, I am absolutely in the can big time for werewolves in anything, and am probably the only person who can watch Werewolf in a Women's Prison for the werewolves, even though I've actually seen the trailer, so you can just pretend I've written a glowing review and save us both a little time from our day with this one: creepy priests, smalltown hysteria, werewolf rampage, made in the mid-80s from a Steve King story when that actually meant something (we're talking about before he made Maximum"it's no Killdozer" Overdrive, obviously), and best of all - and this is a film with a werewolf in it so you know this is pretty special if it tops that - Gary Busey is in it. If you didn't know already, Gary is a God-bothering substance-abusing movie star who has been in loads of big notable films only as a matter of statistical probability because Gary will star in pretty much anything, even if the title is "Gary Busey gets his drunk ass arrested", but Gary is also certifiably batshit fucking insane, and I don't just mean any old crazy, either, Gary is both the good kind of crazy, and the bad kind of crazy in one package to the point that not only can he be the bad kind of crazy that panhandles for tax-dodging hypocrites on their infomercials and somehow end up doing exactly the opposite by the end to the point that he's become the good kind of crazy again, but this is actually him having a rational conversation. Anyway, like Ozzy, he's thankfully cleaned up his act but not actually become any less of a complete looper and thus enjoyed a later fame that transcends something for which he's already well-known and arguably deserving of note and it now colours the stuff he did in the past because holy shit this awesome werewolf movie was awesome enough before I found out it has Gary Busey in it and he looks and sounds like he's barely keeping it together even though this was when he was on the drugs and thus actually medicated into some semblance of sanity for most of the day.
But yeah - SIlver Bullet is a great movie.
Posted by Brigonos at 3/09/2010 12:36:00 pm