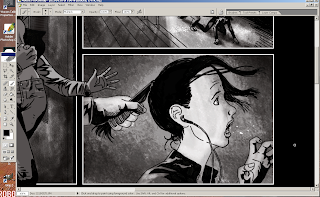 Possibly not the thing to be realising nearly a year into a daily sketchblog of my attempts to 'do comics', but I've suddenly cottoned onto the fact that I haven't a fucking clue how to draw.
Don't get me wrong - stuff looks like stuff, but it's not the same thing as drawing.

Watching: The Road - dropping the humanist charm of the "let's just walk until we die" novel in the transition from prose to screenplay because cinema that's why, it feels like there's a big gaping hole in the middle of this movie and I'm not quite sure what to make of it. It's improved from the book by removing the bit about the baby, which I can live without seeing in live-action, thank you, though the wife is arguably more interesting as an unseen presence than the generic post-natal/post-apocalyptic depressive seen here. Mortensen is fine, but doesn't have much to do apart from be beardy as usual, with the odd bit of added shakiness for drama or whatnot. The kid's a bit annoying, and him off Lost - you know the one I'm on about - shows up for a bit, but otherwise it's hard to say anything about the film apart from the fact that it's a competently made bit of nothing that goes nowhere and achieves little, and while harrowing if your last cinema stop was to see another Wayans racism showcase masquerading as a scatalogical comedy, compared to the measured pace at which the book doles out horrors, the two or so hours of movie is a breeze, and there's not much to take away from it, as even the hopeful denouement of the book is diluted a bit in moving picture form. I did come back from the pub after seeing it and start playing Fallout 3 again - make of that what you will.
Cold Case - oh dear. Police procedural show does a murder in an amateur wrestling promotion. Blech.
Posted by Brigonos at 3/16/2010 04:59:00 pm