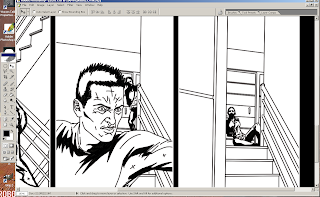 Watching: A Time To Kill - there's a great story in this movie somewhere, about how a guy can be straight-up guilty as sin of gunning down two men in cold blood and yet a jury still won't convict him because the men raped, tortured and tried to murder his 10 year-old daughter. There's definately a story there, a story that encompasses a great deal of pondering on who the law should serve and protect given that no-one in this day and age is stupid enough to believe that the law applies equally to one and all, but it's a story stuck in a film that has a juror grinning as he guarantees a man will die while outside thunder booms as punctuation, and where Matthew McConaughy loses the case on all legal grounds but wins the racist jury over with a three hour closing argument that's basically a country and western song "and after they raped her, they beat her, pissed on her, and then tried to hang her but the branch broke so they threw her off a bridge and she was all nearly dead and stinky with piss and semen" - this is actually how he saves the day, no lie. While making this face:

That's actually his emoting face. It's like aliens came along thousands of years after the human race died out and attempted to make a man using only pictures from a jeans catalogue, and then - I assume after this insult to all that's holy under heaven has killed the aliens in an inevitable rampage - it takes an acting lesson in an attempt to make itself look like it has a sad face. But it doesn't, it has Matthew McConaghy's face - the passive, emotionless face of a jew hunter watching a Rob Schneider marathon.
This movie sucks.
Posted by Brigonos at 3/20/2010 04:54:00 pm