I think I liked you better without hope 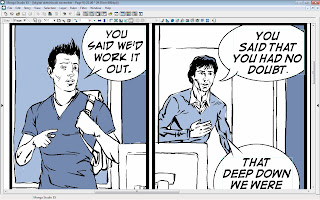 Been playing GTA5 intermittently lately and it's a stunning bit of world-building that got me thinking about Los Angeles - that place Ice T recorded Power and a generation of poor people found their voices in anger and vocal disenfranchisement with the agencies of government that treated them like criminals, and when that voice went around the world and was heard in my neck of the woods... well, it's not like rap music was hard to relate to if you'd grown up in a poor Catholic area in Northern Ireland in the 1980s and 1990s, what with its talking about the police victimising a section of the community and warring gangs etc...  It also helped that being poor was an international language, spoken then in loud and angry voices and through socially-conscious films that masqueraded as gangster culture to put poverty in people's faces.  The shortcomings of Los Angeles were everywhere in Western culture, and because we were actually talking about it, it felt like we could change things someday even if things were bad right now because we weren't hiding from the problem, we were running right at it.
Things have got better here in my neck of the woods what with the Good Friday Agreement and all, and I imagine the same is true for Los Angeles because now it's the place where Ice-T recorded Nash Bridges and a generation of musicians have come up singing about how much money they have, how many women they've had sex with and how big their pool is, and coincidentally rap also went mainstream around the time there was the switchover from angry poor people to successful capitalist - how weird is that?
I guess what I am saying is, going by the music I hear, the tv shows I see and the celebrities I read about these days, there aren't any poor people in Los Angeles anymore, and I think it's great the city has fixed its problems so its culture - and by extension ours - could move on to other things.