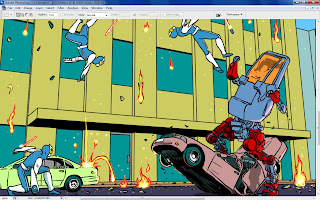 Rubbish old day today that is making me of the mind that Catholic women are a bit better equipped for dealing with death than their squashy male counterparts.  Nuns are still frightening creatures, though.
The new Dracula series is great fun.  There, I've said it.

I like it when things set out to entertain me and there's no getting away from the fact that there just isn't any new take to be had on Dracula unless you go for broke and change it on a fundamental level like setting it in space or something, and this time out, the producers of the show have channeled the last movie version of the 3 Musketeers - a camp, wilfully stupid masterpiece of cinematic excess I enjoyed immensely - to recast Dracula as a swashbuckling steampunk antihero.
I can dig it.
Posted by Brigonos at 11/06/2013 12:46:00 am