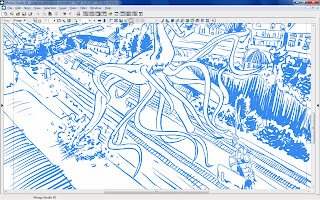 So what other unpopular tv shows can I tell you that I think are great?  I have been watching Karl Urban's new televisual vehicle Almost Human, though that seems to be popular enough to survive without my seal of approval, strange though that concept may be.  Just as well, really, because despite enjoying it, I will admit that it is pretty bad.  There's this bit where the villain stops in the middle of a violent kidnapping attempt on a busy street and delivers a bad guy lecture to the guy he's kidnapping about his (the villain's) plan to kill a load of cops and blow up their police station.  Oddly, this very public act is his undoing when some cops look at a recording of the event.  It's that kind of show.

Also watching Tim Allen's Last Man Standing, which has me genuinely flummoxed.  In its first season it was a show about a right wing idiot forced to adopt to the modern world when he realises that the only male heir he has is the infant son of one of his teenage daughters, and despite Allen's off-screen status as a card-carrying Republican gun owner, the character he played was presented as admirable only in that he was willing to change as he accepted that the world he lived in was more complicated than the one he thought or hoped he lived in.  In the second season... not so much.  Once the show was confirmed to be returning, changes were made in the format to introduce a "hippy liberal" character who often espoused straw man versions of left-leaning notions about renewable energy, vegetarianism, unions, and so on, and Tim Allen's character would take every opportunity to correct his thinking with hard facts or sometimes even a stern lecture, sometimes with the aid of other cast members.  Coincidentally, one cast member took off when these changes were to be introduced.  Odd, that.
Where I'm flummoxed is what the show is trying to achieve here: on one hand it's clearly a vehicle for anti-liberal sentiments railing against multiculturalism and universal health care among other things, but on the other hand expressing these sentiments in the blunt and occasionally disingenuous manner the show does just reinforces the first season's characterisation of the protagonist as an arrogant, privileged white male who's lost touch with the vast majority of the rest of the country but believes otherwise because a small minority have chosen to publicly support him.  it would be easy to attribute this to Tim Allen's wanting the character to reflect his own views and thus be a vehicle for his own comedy material at regular intervals in the show, but then why is there no reliable foil or dissenting voice?  Even bad comedy pokes fun at itself, mocks its own tropes or breaks down its characters, and though Allen has made some comedic offerings that are of questionable quality, he does at least have enough experience in the world of scripted comedy to know how these things work and it's odd that something so family-oriented and middle of the road should excise such a balancing element in the hope of creating an Ali G whose central purpose is to pull a fast one on middle America.
So I'm flummoxed because I can't decide if Tim Allen wants me to laugh at his monstrous creation by design or if it's just happening by accident while he fellates his own political beliefs.  In my defence, when he devotes screen-time to footage of lemmings so he can call them "Obama voters" while opining "maybe they think universal health care is at the bottom of that cliff" at the same time he is showing footage of Karl Marx, Allen doesn't exactly make it easy to call.
Posted by Brigonos at 11/19/2013 12:51:00 am